Q: What model do you suggest to purchase?
A: It depends on what are your needs. If you are a first timer who want simply to try the handheld cheaply and don't care for "color only" games (a few dozens games are only compatible with WonderSwan Color or Swan Crystal) then the original WonderSwan is what I usually suggest because it's very easy to find one for a very cheap price.
On the other hand the definitive revision is without a doubt the Swan Crystal so if you really want the best that is the model I recommend despite being quite expensive compared to the other two.
Q: What games run on the different models?
WonderSwan Color and Swan Crystal run any game available for it in fact there aren't Swan Crystal only games since the Swan Crystal improved only the screen.
On the other hand the original WonderSwan run only black and white games and those games that are dual compatible.
There are a total of 22 games which are dual compatible.
It's easy to identify them since all of them have the logo below in the upper right part of the front cover. The only exception is Hataraku Chocobo/Working Chocobo which came out before the WSC was available therefore doesn't have that logo despite being displayed in colors on WSC.
If you still have doubts then read the Game Release List section, the games with a C (and only that letter) in the second to last column are dual compatible.

Q: Do black and white games get colored when run on WonderSwan Color or Swan Crystal?
A: No, they are still displayed using gray scale.
Q: Is it true that there aren't any game fully in english because WonderSwan was commercialized only in Japan?
A: Most games are in japanese, depending on the games they could have menu or parts of the game displayed in english.
However WonderSwan was distributed also in other asian markets, for example Hong Kong which is an english speaking country.
For those english speaking markets, Bandai Asia localized a few games in english (for example Digimon Anode/Cathode Tamers: Veedramon Version).
Q: How long last the batteries?
A: Every model work with just one AA battery which last 30 hours for the original model, 20 hours for the Color model and 15 hours for the Swan Crystal.
Q: Where is the jack-in for the headphones?
A: WonderSwan has only one port for everything on the right side therefore you need to buy a separate converter if you want to use headphones.
Q: Does any model have a backlit or frontlit screen?
A: No, every WonderSwan model lack a backlit/frontlit screen.
You need to mod the console yourself if you want to implement it.
Here a guide for the frontlit screen mod:
http://anthonythomas.io/frontlit-wonderswan/
Q: The d-pad is very uncomfortable for diagonal input, any way to improve it?
A: Sammy provided, for the release of their Guilty Gear Petit fighting games, with a rounded coin called Wonder Coin to alleviate the problem.

Q: How do I access the system settings menu?
A: With a game cartridge inserted power up the system while holding the Start button.
The settings menu is in english so easily understandable. Here you can set your name which is displayed at the boot screen, your birthday, sex and blood type (why japanese care so much for blood type is beyond me).
Careful with your age since some games adapt the difficulty based on it.
Also useful is the feature to set the default sound volume. 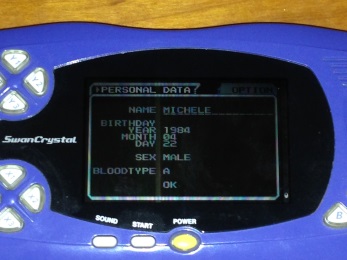 Q: Can you recommend some games to play on WonderSwan even for those who don't understand japanese?
A: Read the Top 15 games section.
Q: Did you know that WonderSwan software is cross compatible with Pocket Challenge V2 by Benesse and vice versa?
A: Yes, Pocket Challenge V2 was designed by Koto and uses a similar architecture. Cool eh. 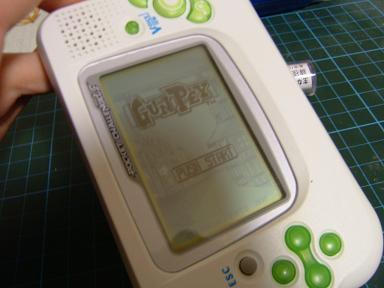 Q: What's the max cartridge size for WonderSwan?
A: The biggest commercial game released is Beatmania for WS by Konami which weights 128 Mbit (that is 16 MB).
It is mainly due to the high quality music the game uses.